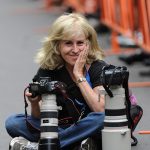 I received my first camera when I was seven years old – a Brownie Scouts box camera with the dancing elf on the front and a flash bulb holder that plugged into the side. I still have it and I remember the day I got it.

I worked for newspapers, photo studios and photo labs after college and before starting out on my own. I’ve been a full-time freelance photographer since 1982. I photographed the Tour de France for 22 years, was the official photographer for New York State at the 2008 DNC, have shot innumerable corporate, family and sporting events, mitzvahs, portraits, magazine assignments, celebrities, food and more.

I was chapter president of ASMP, (American Society of Media Photographers) for three years, as well as on the board of directors for twelve.

I studied at the Colorado Film School and have directed and produced several short movies.

The first time I saw a photo appear in the tray in the darkroom was like magic. I spent hours and hours in the college darkroom where I would lose track of time.

Some of the earlier photographers who inspired me include Henri Cartier Bresson, Pete Turner, Diane Arbus, Dorothea Lange and Arnold Newman. Newman’s line that I’ve shared with clients, “photography is 10% inspiration and 90% moving furniture” is still a favorite. I've also been a fan of painters including Picasso, Hopper, Tanguy, Chagall, Monet, Miro and others.

More recently I’ve been exploring food photography, though I still like doing travel and street photos while traveling.